Home > Tips & Tricks > How To Hit A Golf Ball Straight? 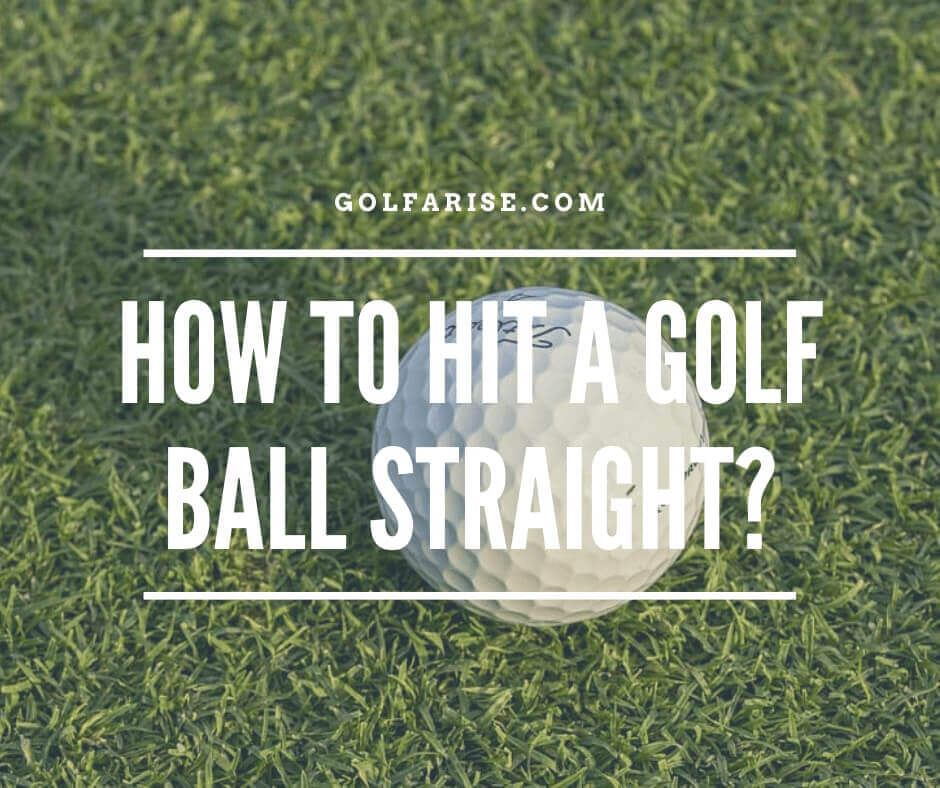 Most people see golf as a simple game in which you can simply hit the ball with a club, and it will go straight. Golf is not as easy as it might seem at first glance. It is a very complex game with very tricky mechanics that requires years of practice to learn. When it comes to hitting a ball straight, it can be hard for new players as they don’t know how to stand correctly or swing the club. Learning how to hit a golf ball straight.

There are little things in golf that we need to focus on so that we can get good at the game. You have to learn all the basic things and then practice hard to master all those things.

How to Hit a Golf Ball Straight?

Golf is a game where the way you stand plays an important role in your shot. If you are no standing in the right stance, you will never hit the shot that you want to hit. For you to hit a shot perfectly, you first need to position yourself in the correct posture. The basic thing that you need to keep in mind is that your lower posture should be wider than the upper one.

The placement of the tee is really important and makes a huge difference on your first shot. The size of the tee is very important too. The main thing to keep in mind is that you don’t have to just stick it right into the ground. But the correct way is to just put it on the ground without forcefully shoving it inside. In this way, the tee will face more upwards and it will allow you to hit more straight shots. Teeing makes a big difference in the type of shot you want to hit. You should always focus on teeing correctly before taking a shot.

After you are done teeing, the next big thing which plays a huge role in a shot is to place the ball perfectly. You need the ball at a place that will allow you to easily hit a straight shot. To do this, you need to have the position more on the forward side. This will make the head of the driver squarer. This will allow you to hit the ball in a straight line without any kind of spin because your driver’s face will be square rather than in an off-center position.

The above tip was for when you are using a normal long club but if you like to play with a shorter club then you have to change the placement of the ball. Then the best position you can put the ball in is the one where your driver starts to move in an upward fashion. In this way, your driver will take the ball in an upward direction without having any spin effect on it.

In golf, there are different types of clubs present for various shots. If you have to play a straight shot to cover the maximum distance, then you will use a driver who has a straight face. There should be no inclination on the face club; otherwise, the ball will go upwards in the air. As you want the ball to go straight in the air, you have to keep the face as straight as possible, so that on contact, the ball goes absolutely straight.

Using a straight driver is a lot beneficial as you need to do much in order to hit a straight shot. Their shape is designed in such a way so that every shot you hit goes into a straight line. This can help you in achieving long-distance shots. Overall, the best thing about using straight drivers is that they are made to mitigate the spin effect on the ball.

After you have chosen your stance and have a good grip on the club. Now comes the main part, the swing of the club. Swinging in golf is also very varied, as different swings can result in different shots. You want to hit a shot in a straight line so you will have to hold the club from the top. As you want to have as much power as possible.

When you swing from the top-side, you will be able to get the maximum force, and thus your shot will go straight. When going for the swing, you should be careful as little things such as weight balance and your grip can alter the shot.

You have to keep maintaining your weight balance, and there should be light more weight on the right side. You should keep in mind not to grip too much because, in that case, you can lose stability. You should hold from a lower position if you want extra stability in your shot.

Straight shots are really common in golf and required when you need to cover long distances. Learning how to hit a ball straight for beginners is important, as this is one of the most common shots played in golf.

By working upon all the above-mentioned things, any new player can easily hit the ball in a straight line. The above tips are really necessary to learn as they are also used by professional golf players. So, every new player should focus on their stance, tee position, and ball lineup if they want to hit a straight shot.

How To Drive A Golf Ball Straight Video:

I've been golfing for over 30 years. I am an avid student of the game and would consider myself to have a few areas of real expertise, including many styles of play and equipment. But if you ask my wife, the only thing I'm really good at is spending time and money trying to get better!

The equipment has come a long way since my early days on the tees, but the keys of the game are remarkably similar. I look forward to sharing my experience with all of you.